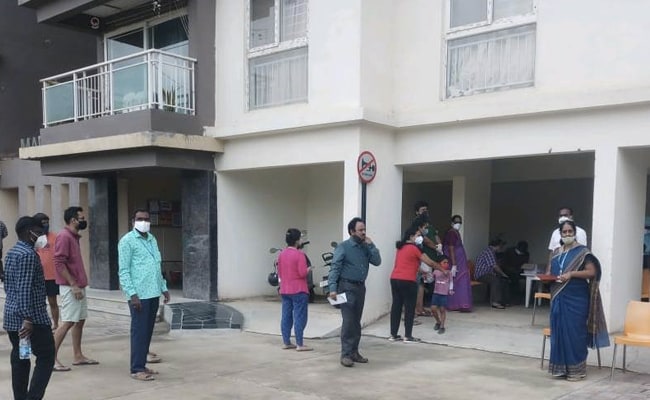 The district administration had started a mass testing drive in the apartment complex.

A COVID-19 alert has been sounded in an apartment complex in Bengaluru after 10 people were found positive for the coronavirus, officials said on Monday.

The 10 Covid cases at the apartment complex having nine blocks with 1,500 residents were found between February 15 and 22, the civic agency BBMP’s commissioner N Manjunath Prasad said in a statement.

Based on the findings, the apartment complex has been declared as containment zone by the BBMP, the civic body’s zonal commission Ranadeep said.

Monday’s development comes days after another apartment complex in Bengaluru was declared a containment zone after 113 of its residents tested positive for coronavirus.

According to district officials, the surge in Covid cases was recorded just days after two marriage anniversary parties were organised in the residential society.

The district administration had started a mass testing drive in the apartment complex after around two dozen cases emerged from there in a couple of days.

Most of those who tested positive in the first case are below the age of 50 and are asymptomatic, Dr Krishnappa, the medical officer investigating the area, had told NDTV last week.

India, which had been reporting close to one daily lakh cases last year, has been recording under 10,000 daily cases for the last few days. The centre had last month declared that the country – the second worst-hit after the United States – has flattened the coronavirus curve.

Experts, however, have warned people against dropping their guard against the virus because of the discovery of mutant strains abroad.

Karnataka is currently the third worst-hit state after Maharashtra and Kerala.