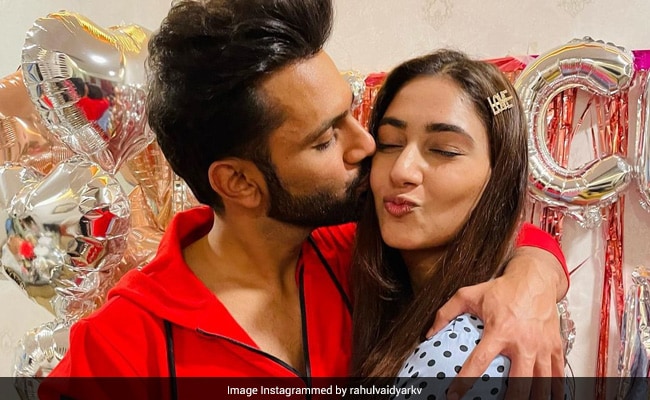 Rahul Vaidya, who was a finalist on the recently concluded Bigg Boss 14, reunited with his loved ones with a blockbuster party, glimpses of which he shared on his Instagram. Needless to say that actress Disha Parmar was the special guest at Rahul Vaidya’s homecoming party. The 33-year-old singer painted Instagram red as he posted a bunch of photos with girlfriend Disha Parmar, in which they share a few loved up moments. Rahul Vaidya captioned the post with a heart-warming play of words, dedicated to Disha Parmar: “Back to my direction (Meri Disha),” he wrote. See what he did there? Here’s how Rahul Vaidya celebrated his reunion with Disha Parmar:

Meanwhile, here’s a glimpse of Rahul Vaidya’s homecoming “pawri” with friends and family:

In November, Rahul Vaidya had proposed to Disha Parmar on Bigg Boss 14 as a surprise gift on her 26th birthday. Calling her the “most beautiful girl” he has ever met, Rahul said that he will be waiting for Disha’s answer. Months later on Valentine’s Day, Bigg Boss sent Disha Parmar to meet Rahul Vaidya in the house. Proposed by Rahul Vaidya again, Disha Parmar said yes. The couple, who have been together for over two years, co-starred in Rahul Vaidya’s single Yaad Teri in 2019.

Bigg Boss 14 wrapped on Sunday with a blockbuster finale and TV star Rubina Dilaik as the winner of this season. Apart from Rahul Vaidya and Rubina Dilaik, contestants such as Aly Goni, Nikki Tamboli and Rakhi Sawant were the finalists for this season.