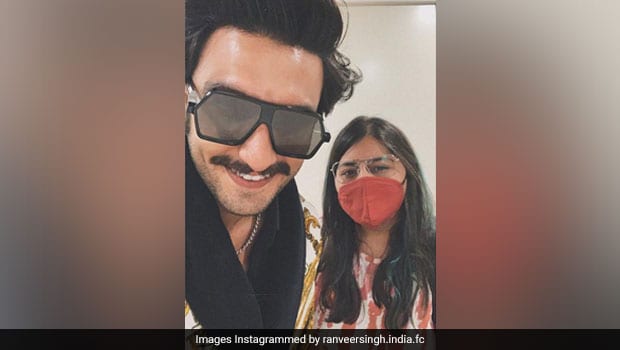 The ‘Pawri Hori Hai’ trend has literally taken over the internet like nothing else. Not just us but even the celebrities are jumping on the bandwagon with some of the most hilarious videos. From Shilpa Shetty, Shahid Kapoor and Randeep Hooda to Deepika Padukone, Bollywood seems to be in love with the latest viral trend. Joining the list is actor Ranveer Singh with what could be an actual ‘pawri’ for a foodie! In one of the videos going viral on the internet, Ranveer is seen with a fan, holding spoons along with a box of gajar ka halwa.

In the video, Ranveer being his sporty self says, “Yeh hamara gajar ka halwa hai, yeh hum hai aur yeh hamari pawri hori hai”. As he is speaking, he is joined by a fan who also posted the video on her Instagram page. Take a look at the hilarious video here:

A ‘pawri‘ with gajar ka halwa is surely something we would love to join, don’t you agree? The video has so far garnered more than 8k views. The fan, who was visibly glad to have met the superstar wrote “Yeh Hamari Pawri ho rahi hai. The man with a golden heart, thank you for today baba you made my day. Proud to be your fan always and forever. Thank you everyone who made an effort to make this come true”.

Several Indian celebrities have caught up on the ‘#pawrihorihai’ trend which was originally started by a Pakistani influencer Dananeer Mobeen, who posted a video with her friends as they were having fun on a road trip.

About Aanchal MathurAanchal doesn’t share food. A cake in her vicinity is sure to disappear in a record time of 10 seconds. Besides loading up on sugar, she loves bingeing on FRIENDS with a plate of momos. Most likely to find her soulmate on a food app.