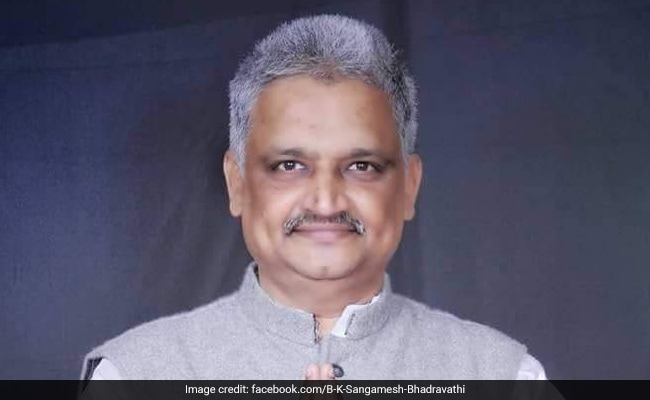 Congress MLA B K Sangamesh was suspended for one week.

The Congress’s protest in the Karnataka assembly on Thursday against the ruling BJP raising the issue of unifying state and central elections saw an MLA take off his shirt. A furious Speaker Vishweshwar Hegde Kageri adjourned the house soon after and suspended the MLA from Bhadravari, BK Sangamesh for one week.

Former Chief Minister of the Congress, Siddaramaiah, described the “One Nation, One Election” push as being part of the agenda of the Rashtriya Swayamsevak Sangh (RSS), the ideological mentor of the ruling BJP, as his party MLAs raised slogans against the issue.

Floated by Prime Minister Narendra Modi after taking office in 2014, many BJP leaders have backed the proposal to hold all elections together, from Lok Sabha to state assemblies and local bodies, arguing that this will orient various elected bodies fully towards development as the current cycle of frequent polls across the country hampers work.

The Congress, however, had indicated it would protest against the subject. Karnataka Congress president, D K Shivakumar, told journalists ahead of the start of the session, “We are going to object to the Speaker bringing up the One Nation, One Election issue. The central government has not issued, Speaker has not issued. He himself has taken it up. They want to bring it to the mind of the people for some political agenda. We are going to oppose it.”

The Karnataka legislature session resumed on Thursday with Chief Minister B S Yediyurappa expected to present the state budget on Monday. Just one day before the session, water resources minister, Ramesh Jarkiholi, resigned – after being accused of asking a woman for sex in return for a promise of a job.

The opposition Congress is expected to give the government a tough time on this issue and is also likely to tackle the ruling BJP on the ongoing reservation debate for different castes, the financial condition of the state – and illegal granite quarrying with the state having seen two recent explosions that claimed lives at quarrying locations.