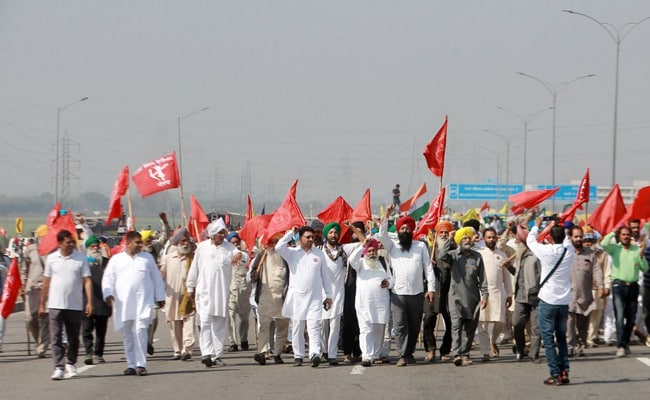 Farmers block a highway to mark 100 days of their ongoing protests against new farm laws.

As the farmers’ protest against the Centre’s new farm laws completed 100 days, the Congress on Saturday said the period was a “black chapter” in India’s democracy for the treatment meted out to the protesters and also marked 100 days of the ruling BJP’s “arrogance”.

Congress leader Rahul Gandhi hit out at the Centre over the farmers’ protest and said nails were laid at Delhi’s borders for those, whose sons risk their lives at the country’s borders.

His attack came after the farmers’ agitation completed 100 days with the protesting union leaders asserting that their movement is far from over and they are “going strong”.

In a tweet in Hindi, Mr Gandhi said, “Whose sons risk their lives at the country”s borders, for them nails have been laid at the borders of Delhi. ”Annadaatas” demand their rights, government commits atrocities.”

Congress general secretary Priyanka Gandhi Vadra also hit out at the Centre in a tweet in Hindi.

She said, “100 days of farmers” struggle, of fight for rights, of respect for ”annadaatas”, of the path shown by Gandhiji, Sardar (Vallabhbhai) Patel, Nehruji, (Lal Bahadur) Shastriji, Shaheed Bhagat Singh.”

With the hashtag ”100DaysOfBJParrogance”, she said, “100 days of BJP government’s arrogance, of assault on farmers, of lies and scorn for farmers.”

Congress spokesperson Pawan Khera said the protesting farmers have been braving all odds — of nature and the might of the State — for the last 100 days.

“Each one of us, whichever category we may belong to, have our own struggles and that is the awareness on which the government depends,” Mr Khera said.

There is one section of the society that has found time to come out and protest — farmers — against these “black laws” and they are “our voice”, he added.

“The country has seen through this government”s efforts for headline management…a cornered regime is there and how will it react now is for us to wait and watch,” the Congress leader said.

“The farmers have called this day a black day. We think this is a black chapter in our democracy, where everything was done to disrupt this peaceful protest. They (farmers) were demonised, all kinds of conspiracies were hatched against them, but they stayed on,” he added.

The Congress demands that the three new farm laws should immediately be repealed, Mr Khera said.

Farmers, mostly from Punjab, Haryana and western Uttar Pradesh, have been camping at several border points of Delhi, including Tikri, Singhu and Ghazipur, since November 28 last year, demanding a repeal of the three new farm laws and a legal guarantee on the minimum support price (MSP) for their crops.

The government has denied allegations that it is trying to put an end to the MSP and the “mandi” (wholesale market) systems through the new laws. Prime Minister Narendra Modi has also assured the farmers that the MSP system would continue.

Farmer leaders have made it clear that they would not settle for anything less than a repeal of the new agriculture laws.